Video Ads: How to Use Youtube for Your Business Success

Advertise on YouTube? Most people are probably aware by now that YouTube offers more than just cute panda videos. However, the video platform is still hardly perceived as an attractive advertising medium. Wrongly so, in our opinion. That's why we have opened up YouTube as an additional communication channel for our client CRB Analyse GmbH and here we provide an insight into the most important aspects of YouTube advertising.

Good to Know: The Small 1x1 of YOUTUBE Video Ads

As the second largest search engine after Google, YouTube reaches a huge audience in 76 countries and, according to Statista, is the video platform with the widest reach in Germany, with a market share of around 52%. And because videos on YouTube can be found on almost every conceivable topic, it is only logical that potential customers for every company can be reached via this portal.

The community of YouTube users is as diverse as the videos found on YouTube. To successfully advertise on YouTube, it is therefore important to define target groups and set the appropriate targeting for each video ad. In this respect, YouTube offers a variety of ways to separate the wheat from the chaff, i.e. to show video ads only to those videos that are sought and seen by potentially interested users. For example, YouTube advertisers can choose to show their video ads only on selected channels and videos, or to control the delivery of their ads based on specific topics, interest groups or keywords. The inclusion of demographic data and targeted remarketing are also possible when placing video ads. In this way, the chance of meeting the "right", i.e. generally interested users and potential customers, is increased enormously.

Similar to Google AdWords, the ad placement on YouTube can also be scaled easily depending on the available budget. TrueView In-Stream video ads allow users to skip the ad after five seconds. Costs are only incurred if 30 seconds of the video ad, or for shorter spots, the entire ad is viewed or interacted with. For advertisers, this means that in many cases the insertion of their video remains free of charge.

Since video ads on YouTube are placed via a Google AdWords account, campaign success can be analyzed in a differentiated manner. When analyzing, it should be noted that YouTube advertising is primarily used to promote products and other offers. Key performance indicators are therefore not conversion rates as with Google search, but rather parameters such as reach, cost per view and click rates. YouTube Analytics also provides usage data such as skip rates and average video runtimes. 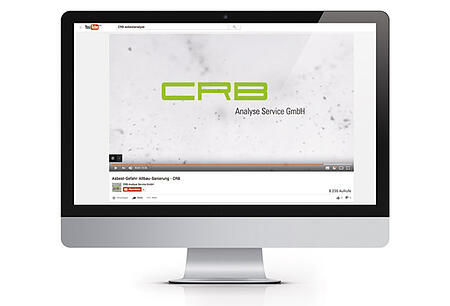 With Blackbit's support, CRB Analyse Service GmbH has been consistently and very successfully using search engine optimized landing pages and their advertising with Google AdWords for several years now. To enable the company to exploit existing market potentials even better and to open up new target groups, we have created an informative advertising video, which recently started promoting CRB's services as an Instream video ad on YouTube.

Since the YouTube campaign is controlled via the existing Google AdWords account, only one YouTube channel had to be set up in addition as the basis for the video advertising. The comprehensive targeting capabilities, which include demographic data, YouTube user interests and the selection of videos by topic or keyword, allow video ads to be highly targeted, ensuring that the ads reach a relevant audience and minimizing wastage. That's why video ads have a very good playout rate despite a limited budget.